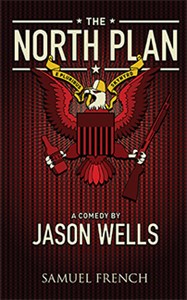 Sharp, dark political comedy... Funny and chilling, sometimes by turns and sometimes all at once... Consistently supplies acid, dystopian laughs


After a ruthless faction seizes power in Washington, Carlton Berg, a bureaucrat for the State Department, runs off with the new regime's top secret enemies list. Unfortunately for Carlton, the chase has come to an end in a police station in the Ozarks town of Lodus.

With a pair of DHS agents on the way, Carlton's last hope is in the people around him: an unsympathetic police chief, an ambivalent administrative assistant, and fellow prisoner Tanya Shepke, a motor-mouthed recidivist who's turned herself in for drunk driving and thinks Skynyrd should be on the new money.

... As uproarious as it is unsettling ... As terrifically entertaining as it is thought-provoking.' - Chicago Maroon'Jump-to-your-feet fantastic! ... The plot is solid. The characters are genuine. The dialogue is smart. The intrigue and absurdity is pure 'Pulp Fiction' ... At the show I saw, the audience literally jumped to their feet with thunderous applause and cheering ... Funny, scary and totally believable - which makes it funnier and scarier!

... We found ourselves immersed in equal measures of armrest

gripping suspense and hilarity throughout The North Plan'

Despite such serious thematic concerns as the legitimacy of political authority, the importance of dissent and the uses of torture, The North Plan is a threat to public order because it’s a laugh riot... Building a headlong momentum until its sudden conclusion - which on opening night brought the crowd to a hooting, hollering standing ovation.

Wells (Men Of Tortuga) is a highly entertaining writer with a keen sense of how to fire up a pressure cooker on a stage and keep an audience feeling jumpy ... Fun, smart, involving and just disturbing enough for a Saturday night on the town.' - Chicago Tribune'The North Plan is funny and deeply political.

A powerful work of dystopian agitprop ... As disturbing as Jason Wells' play is, it's just as hilarious ... The show crackles with wit and energy ... One of the best things produced at Steppenwolf this year, in a year I've liked most everything on that stage. The North Plan is one of those rare plays that manages to combine a powerful message ... with a raucous sense of humor and deft stagecraft that plays with conventional notions of farce and manages to make them as funny as the first time you'd ever seen such things ... If I were an artistic director shopping for a play, I'd go all-in to pick this one up. As it is, I can only suggest that you see this production while you can.

Premiere Production: The North Plan had its world premiere at Portland Center Stage on January 13, 2012. It was directed by Rose Riordan.