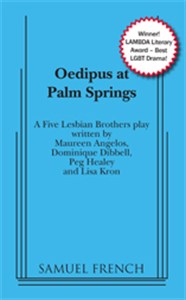 Richly funny as it is, Oedipus at Palm Springs is also a serious inquiry into the unforseen extremities of despair that can attend the search for a pure and lasting love.


Irreverent theater group The Five Lesbian Brothers get their greasy prints on a classic. Oedipus at Palm Springs follows the dark adventure of two couples on a retreat to the desert resort town. While new parents Fran and Con try desperately to jump-start their sex life, May-December love bunnies Prin and Terri can't keep their hands off each other. What begins as a hilarious, boozey weekend takes a horrific turn after a secret is revealed.
Two parts comedy with a shot of tragedy shaken over ice, Oedipus at Palm Springs is a brave examination of the messy guts of relationships.
REVIEWS:

Along the way to the inevitable dark twist is much lightness and enlightenment to revel in-- not just a lot of zingy one-liners about commitment, gay life in America, parenthood, and growing older, but also a real sense of these four women as women, friends, and lovers... It may be the saddest comedy you'll ever see.

Richly funny as it is, Oedipus at Palm Springs is also a serious inquiry into the unforeseen extremities of despair that can attend the search for a pure and lasting love.

Premiere Production: Oedipus at Palm Springs was first produced by the New York Theatre Workshop in July 2005. The performance was directed by Leigh Silverman.