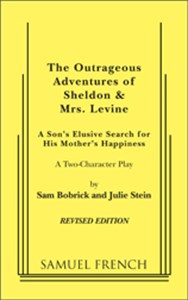 Outrageous Adventures of Sheldon and Mrs. Levine, The


This is an exchange of outrageous and hilarious letters between an overbearing mother and her 31 year-old runaway son. In this love/hate relationship, Sheldon blames his mother, Mrs. Levine, for breaking up his marriage and ruining his life. His mother can't understand why something so trivial should bother him.Share in the angst, the aggravation, the madness, and the mail of two people, who although thousands of miles apart, are still too close to each other for their own good.
NOTE: The play is constructed so that it can be performed either read, memorized or a combination of the two.
REVIEWS:

"Plenty of big laughs... as both characters spiral toward insanity."

"Both playwrights use their strengths to put together a solid comedy."

The Outrageous Adventures of Sheldon and Mrs. Levine ran at the Falcon Theatre in Burbank, California from October 17 - November 18, 2007. The production was directed by John Bowab and produced by Garry K. Marshall and Kathleen Marshall.

MRS. LEVINE - a woman in her mid-fifties
SHELDON - her thirty-one year-old son