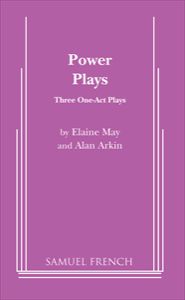 Consists of The Way of All Fish, Virtual Reality and In and Out of the Light, three short plays about the collision of wills that were an Off-Broadway comedy sensation starring the authors.


Consists of The Way of All Fish, Virtual Reality and In and Out of the Light, three short plays about the collision of wills that were an Off-Broadway comedy sensation starring the authors.

The Way of All Fish looks at the relationship between Ms. Asquith, a wealthy woman in New York, and her secretary, Ms. Riverton. When Ms. Asquith invites her to dinner, the two women literally and figuratively flex their muscles to prove who really has the upper hand in their relationship.

Virtual Reality follows Lefty as he starts a new job at an undisclosed location. As he meets his supervisor, De Recha, Lefty begins to question what exactly this new job is going to be, but the more he works in the imaginary the more taxing his job becomes.

In and Out of the Light is a classic slamming doors farce that follows one dentist's desire to cozy up with his new assistant. The only problems is his son, Harry, desperately needs to reveal not one, but two hurtful secrets to his father. Not to mention his hyper-anxious patient, Wanda, won't let just anyone give her Novocaine.
REVIEWS:

Classic comedies...with subversive details that keep catching you off guard....The evening...percolates with actorly inventiveness and a willingness to pursue a warped logic step by step into the land of absurdity. Has a heady sense of discovery, of seeing prototypical situations being twisted and spun to the point of dizziness, of disparate comic minds bouncing off each other.

Hilarious as well as thoughtful.

Premiere Production: Power Plays were originally produced at the Manhattan Theatre Club in New York City in April 1998 under the direction of Alan Arkin.