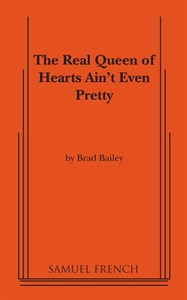 Real Queen of Hearts Ain't Even Pretty, The

Bailey's dialogue is clever, amusing and on the mark, surprisingly tuned to the femininity of his characters. The play is a winner.


We are backstage in the girl's locker room, at the annual Queen of Hearts Beauty Pageant at a high school in a small town in Alabama in 1976 with two girls who are competing in the pageant, and two who aren't, for reasons which supply a lot of the humor, and a lot of the drama, in this much produced and much acclaimed new play.
Feathers fly when the "new girl," Sherri Lee, wins. She is very popular with the boys, which makes her very unpopular with the girls. There are intimations of Vanities here, as well as Crimes of the Heart. There are four simply superb roles for young actresses, laden with excellent monologue material; in short, this is a perfect show for colleges and the more adventuresome high schools.
REVIEWS:

Bailey's dialogue is clever, amusing and on the mark, surprisingly tuned to the femininity of his characters. The play is a winner.

The Real Queen of Hearts Ain't Even Pretty had its world premiere at The University of Alabama's Allen Bales Theatre on December 1, 1982.
The first professional production of the play opened in Los Angeles at The Actors Playhouse on October 13, 1983.