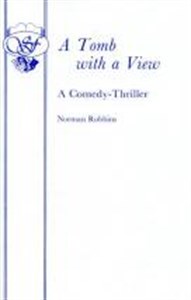 Tomb with a View, A

"Laughter with a chilly spine."


A Tomb With A View is set in as sinister an old library as one is likely to come across presided over by a portrait of a grim faced, mad eyed old man. There, a dusty, lawyer reads a will (involving some millions of pounds) to an equally sinister family one member of which has were wolf tendencies, another wanders around in a toga of Julius Caesar and a third member is a gentle old lady who plants more than seeds in her flower beds.

By the third act, there are more corpses than live members left in the cast and what about the sympathetic nurse and the author of romantic novels are they all, or more than, they seem to be? All is revealed as the plot twists and turns to its surprising conclusion.
REVIEWS:

"This is a well written and well constructed play with more twists and turns than a corkscrew and you will never work out who the murderer is, so you have to wait to the end of the play to find out."

Seaford and Newhaven News, May 2013

"Laughter with a chilly spine."