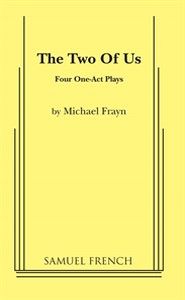 Two of Us, The

A collection of short plays.

The four plays are not connected except by the fact that they can all be played by the same two performers.
In the first Black and Silver, a husband and wife return to the hotel room in which they spent their honeymoon.
In The New Quixote a young man has spent a night with a girl, to whom to encounter is so casual that he has even forgotten it when he leaves her. However, he returns to take up residence -- but will they be happy together?
Mr. Foot, the third play, concerns a couple -- he is in line for a new job, she may be "vetted" as his wife, by his employer. She creates an imaginary interview.
The last play, Chinamen, is the longest, and in it the players share five parts. It concerns a dinner party to which friends are invited who at all costs must not be allowed to meet. They do!