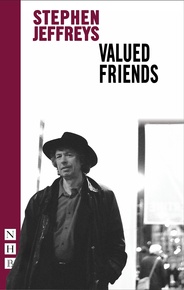 A comedy of manners about the property market.


A comedy of manners about the property market.
Four people live together in a large old house in London. They include Sherry, a wacky girl trying to make it as a comedienne; Paul, a pop music journalist; Paul's girlfriend Marion; and Howard, who is writing a left-wing analysis of the corruption of capitalism under the Thatcher government. They all are perfectly content living where they are; until, that is, a developer offers them a huge sum of money to vacate. Soon, their talk about music and idealism gives way to heated discussions about real estate, capital appreciation and negotiating tactics. They decide that they can force the developer to raise his offer by renovating the house; and three years of this leave them with a huge capital gain, and a deep spiritual loss.
Stephen Jeffreys' play Valued Friends was first performed at Hampstead Theatre, London, in 1989. Jeffreys was named Most Promising Playwright at both the Evening Standard and Critics' Circle Awards that year.
Valued Friends is available in the collection Stephen Jeffreys: Plays.
REVIEWS:

"A caustic commentary on Thatcher's Britain and the explosion of property prices... Jeffreys has captured a time of huge social and economic change where greed is good, even if it leaves you emotionally empty."