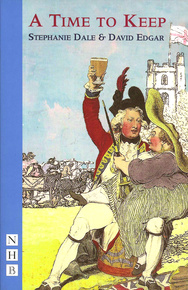 Time to Keep, A

A large-scale historical romp in the terrain between Jane Austen and Charles Dickens.


A large-scale historical romp in the terrain between Jane Austen and Charles Dickens.

Set against the backdrop of the threatened Napoleonic invasion of 1804, David Edgar and Stephanie Dale's play A Time to Keep is the story of an unlikely but passionate romance between a well-born but feisty young woman and the youngest son of a family of notorious smugglers.

With over 100 characters, from George III and his court to the criminal classes, the play is a rollicking example of the community play, originally written for the Dorchester Community Players but easily adaptable for smaller (and larger!) companies alike.
REVIEWS:

"Beautiful and memorable... theatre at its fundamental level: a shared, imaginative experience, communicated with winning passion."

"Wonderfully vivid... a powerful evocation of the way provincial England, far from the madding crowd, is still deeply haunted by its own past."