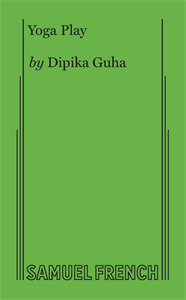 The headquarters of a successful athleisure wear company provide the setting for an uproarious exploration of cultural appropriation, exploitation, consumerism, fat shaming, and yoga pants.


Joan has been hired to stabilize Jojomon, a yoga apparel giant, after its CEO is brought down by a fat-shaming scandal. But just as she finds her stride, more trouble surfaces and sales plummet. Joan comes up with a plan so risky that it could make or break the company and her career—and what it requires from her CFO, Raj, is far beyond the call of duty. This sharp comedy asks what it takes to find your own authenticity in a world determined to sell enlightenment.
REVIEWS:

"A fresh new comedy with a sharp cultural bite."

"Comic nirvana...the show [has] an uncommon comic electricity, an aliveness to the present moment that’s only possible in live theater."

"A well-polished romp...Yoga Play is that welcome commodity, a fresh new comedy with a sharp cultural bite that may be educational as well as entertaining."

"Rollicking...Yoga Play is like a good class. One departs revitalized."

"Yoga Play touches intelligently on important themes such as cultural appropriation, exploitation, consumerism, fat shaming, and workplace abuse. But don’t expect an earnest evening of politically correct theatre. Sure, Yoga Play will encourage you to think, but mostly, it’s about making you laugh."

Premiere Production: Yoga Play was commissioned and first produced by South Coast Repertory in Costa Mesa, California on April 21, 2017, under the direction of Crispin Whittell.