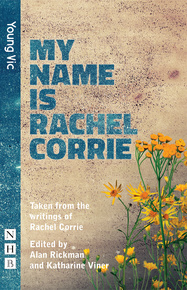 My Name is Rachel Corrie

March 2003. The Gaza Strip. 23-year-old Rachel Corrie stands between a Palestinian house and an armoured bulldozer.

March 2003. The Gaza Strip. 23-year-old Rachel Corrie stands between a Palestinian house and an armoured bulldozer.

Meet the heroine behind the headlines. Edited by Alan Rickman and Katharine Viner and based on the writings of Rachel Corrie herself, this play captures the enduring idealism, blazing eloquence and sardonic wit of her vivid diary entries.

My Name is Rachel Corrie was first performed by Megan Dodds at the Royal Court Theatre, London, in April 2005, winning Best New Play at the 2006 WhatsOnStage Awards.

It was revived in a new production at the Young Vic, London, in 2017, directed by Josh Roche, winner of the JMK Young Directors Award 2017.
REVIEWS:

"Funny, passionate, bristling with idealism and luminously intelligent, Corrie emerges as a bona fide hero for this brutalised world of ours."

"A deeply moving personal testimony... Theatre can't change the world. But what it can do, when it's as good as this, is to send us out enriched by other people's passionate concern."