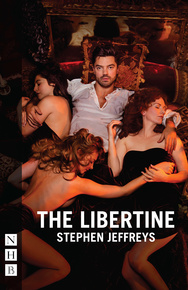 "I am up for it. All the time. That’s not a boast. Or an opinion. It is bone-hard medical fact."


John Wilmot, Earl of Rochester. Charismatic poet, playwright and rake with a legendary appetite for excess. Yet when a chance encounter with an actress at the Playhouse sends him reeling, he is forced to reconsider everything he thinks and feels.

With all the wit, flair and bawdiness of a Restoration comedy, Stephen Jeffreys' brilliant play is an incisive critique of life in an age of excess.

Originally performed at the Royal Court Theatre in 1994, The Libertine has been staged around the world, was adapted for radio, and became a film. This edition of the play was published alongside the 2016 production at the Theatre Royal Bath and Theatre Royal Haymarket, directed by Terry Johnson and starring Dominic Cooper as Wilmot.
REVIEWS:

"The dialogue burns with a lusty vigour... the storytelling is confident and compelling... it's perfect, it's profound, and it's fun too."

"Captures the zesty backstage politics of Restoration theatre… an invigorating, warts-and-all portrait of a self-destructive sceptic."

Premiere Production: Out of Joint tour, 1994.