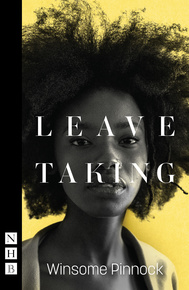 "What doctor know about our illness? Just give you pills to sick you stomach and a doctor certificate. What they know about a black woman soul?"


In North London, Del and Viv are soul-sick. Del doesn't want to be at home; staying out late – 3 p.m.-the-next-day late – is more her thing. Viv scours her schoolbooks trying to find a trace of herself between their lines.

When Enid takes her daughters to the local obeah woman for some traditional Caribbean soul-healing, secrets are spilled. There's no turning back for Del, Viv and Enid as they negotiate the frictions between their countries and cultures.

Two generations. Three incredible women. Winsome Pinnock's play Leave Taking is an epic story of what we leave behind in order to find home. It premiered in 1987, and was revived at the Bush Theatre, London, in 2018, in a production directed by the Bush's Artistic Director, Madani Younis.
REVIEWS:

"A devastatingly powerful story of a British-Caribbean family... why Winsome Pinnock's play isn't on the English Literature syllabus is a mystery to me, given its shocking contemporary relevance... this play warms and devastates."

"A beautiful, humourous and often impossibly sad portrayal of the immigrant experience... Pinnock's dialogue is a subtle marvel, offering all the poetry and rhythm of the Jamaican accent, where phrases sing with layers of meaning. It is a brilliantly wrought piece of drama."

"An epic story that spans generations and puts the narratives of four formidable women on the centre stage... Leave Taking is an undeniably important addition to our theatrical landscape."

"There are few plays in British theatre that speak so directly, resonantly and truthfully to the experience of the black woman. Winsome Pinnock's first full-length play does this with such profound eloquence – it is rousing to watch… Leave Taking is timely in its politics, yet timeless in its themes."

"Three decades since its debut Winsome Pinnock's pioneering portrayal of the lives of black Britons feels shockingly contemporary... Pinnock was a pioneer and her piece still hits home through its often shocking honesty about the hazards facing black people in Britain."