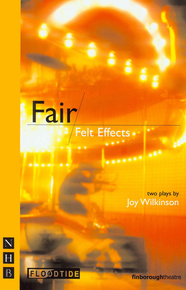 In Fair - seen in the West End's Trafalgar Studios - Melanie meets Railton upside down on the Revolution ride. A spin on the waltzer, some chips and a spliff, and it goes off like fireworks... until she discovers his politics, and the relationship implodes.

What is turning young people to the right? How and why are the BNP managing to recruit? Fair confronts the racism brewing in Britain's northern towns and beyond.

Fair was first performed at the Finborough Theatre, London, in 2005, and then at Trafalgar Studios in the West End in 2006.

Felt Effects unearths the seismic relationship between two half-sisters and their mother when they are forced together in the A&E ward of the local hospital.

Tremors happen around us everyday and are so weak they are classified as 'Not Felt', but the effects of the earthquake now erupting under this family's feet are impossible to ignore.

Felt Effects was joint-winner of the 2004 Verity Bargate Award and was first staged at Theatre503, London, in 2006.