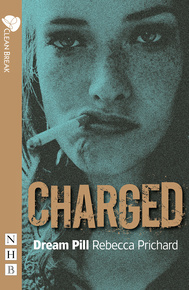 Dream Pill introduces its audience at close quarters to Tunde and Bola, two nine-year old girls sex-trafficked to a UK city. In a claustrophobic basement, they share their child's eye view of the journey they have taken, the people they have encountered and their strange ways, and the objects they have collected. With a naivety, imagination and humour that have survived so far against all odds, they draw in the audience with their childlike fantasies, innocent superstitions and unanswerable questions.
Rebecca Prichard's short play Dream Pill was first performed at Soho Theatre, London, as part of Clean Break's Charged season in November 2010.
Dream Pill is available in the collection Charged.
REVIEWS:

"An urgent and intelligent piece of theatre that engages with a topical issue without hectoring its audience. Though sometimes it's a tough piece of drama, often hard to watch, it's utterly compelling and impossible to look away from."