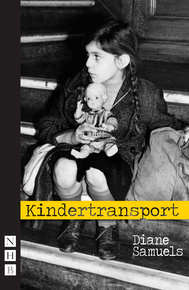 A modern classic about one woman's struggle to come to terms with her past.


A modern classic about one woman's struggle to come to terms with her past.
Brutally separated from her German Jewish parents at the age of nine, Eva is brought to England with the promise of a new life...
Between 1939 until the outbreak of World War II, nearly 10,000 Jewish children were taken from their families in Nazi-occupied Germany and sent to live with foster families in Britain. Diane Samuels’ seminal play, Kindertransport, imagines the fate of one such child. Now widely considered a modern classic, Kindertransport has been read and studied the world over.
Since its premiere the play has been revived several times. Watford Palace Theatre staged it in 1996, in a production that transferred to the West End. Renowned theatre company Shared Experience also revived the play to great acclaim for a regional tour in 2007.
This edition includes several personal memoirs by German-born children whose lives were saved, and transformed, by the Kindertransport.
REVIEWS:

"Desperately harrowing... searing theatre that cuts across a continuum of suffering to the very heart of what unifies us as human."

"A powerful contribution to Holocaust literature... presented with emotional clarity and intense sympathy."

"Samuels has written the best play about the pain and passion of mother/daughter relationships."