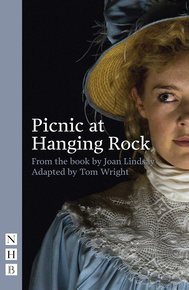 
On a summer's day in 1900, three Australian schoolgirls on a picnic expedition to the remote Hanging Rock abscond from their group. They are last seen heading towards the beckoning Rock...

In Tom Wright's chilling adaptation of Joan Lindsay's classic novel, five performers struggle to solve the mystery of the missing girls and their teacher. Euphoria and terror reverberate throughout the community, as the potential for history to repeat itself becomes nightmarishly real.

This adaptation of Picnic at Hanging Rock was first co-produced by Malthouse Theatre and Black Swan State Theatre Company, Perth, and first performed at Malthouse Theatre, Melbourne, in 2016. The play received its European premiere at the Royal Lyceum Theatre Edinburgh, in 2017.
REVIEWS:

"Emotion, violence and meaning bubble up like magma… mythic in its scope and magical in its appearance... an evocative adaptation that finds horror not in nature, but in the civilising class."

"A potently poetic, enigmatic pschyco-drama… Tom Wright's adaptation of Joan Lindsay's novel [has] an authentic, snarling economy of polite and prim, petticoat savaged menace… as compelling, visceral and insistent as that wasp in your otherwise perfect picnic jam pot. Unmissable."

"This retelling of the Joan Lindsay cult classic proves the book's theme remains relevant – and will terrify the pants off you."