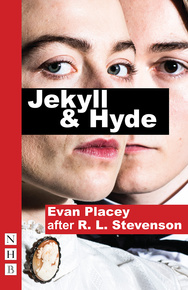 Everyone has another face they hide behind...


Everyone has another face they hide behind...

A radical re-imagining by playwright Evan Placey of Robert Louis Stevenson's classic tale, where civilised society meets seedy Soho in a thrilling collision of Victorian England with the here and now.

Written for the National Youth Theatre, and first performed by the company at the Ambassadors Theatre in the West End in 2017, Jekyll & Hyde offers a full range of parts for schools and youth-theatre groups looking for a contemporary reinvention of a macabre classic.
REVIEWS:

"Incendiary... a furious, whip-smart and – that rare thing – genuinely dangerous theatrical riposte to the men who have had their hands on the levers of power for far too long... thrilling stuff."

"A topical, intelligent, thoughtful, feminist take on Robert Louis Stevenson's novella... rollicking good theatre – frank, uncompromising, fresh and often quite confrontational… an ensemble piece in that it forms a fine show case for the talents of every cast member."