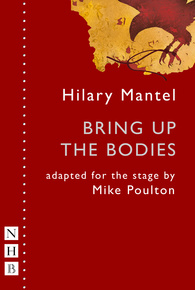 Bring Up the Bodies (stage version)

Thomas Cromwell. Son of a blacksmith, political genius, briber, charmer, bully. A man with a deadly expertise in manipulating people and events.

Thomas Cromwell. Son of a blacksmith, political genius, briber, charmer, bully. A man with a deadly expertise in manipulating people and events.

Mike Poulton's two-part adaptation of Hilary Mantel's acclaimed novels Wolf Hall and Bring Up the Bodies is a thrilling and utterly convincing portrait of a brilliant man embroiled in the lethal, high-stakes politics of the Court of Henry VIII.

In the second part, Bring Up the Bodies, the volatile Anne Boleyn is now Queen, her career seemingly entwined with that of Cromwell. But when the King begins to fall in love with plain Jane Seymour, the ever-pragmatic Cromwell must negotiate within an increasingly perilous Court to satisfy Henry, defend the nation and, above all, to secure his own rise in the world.
Bring Up the Bodies is published in a volume with Wolf Hall.
REVIEWS:

"Gripping yet darkly funny... a bold, unforgettable lesson in history and politics."

"An intelligent, fresh and dramatic retelling... a real gem of a script for audience and actors alike."

"Superb... the mother of all costume dramas."