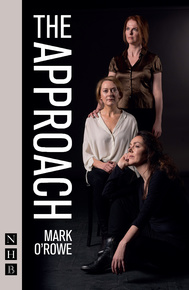 Listen carefully…
Three women.
Three conversations.
As the details of what they share begin to diverge, we realise that a subtle game of survival is being played.
Both psychological puzzle and quietly devastating tragedy, Mark O'Rowe's The Approach explores the inner lives of Anna, Cora and Denise as they desperately try to make sense of their world. It premiered at the Project Arts Centre, Dublin, in 2018, in a production by Landmark Productions.
REVIEWS:

"A play of intense juxtapositions, of silence and anger, façade and vulnerability, distance and communion. Intensely thoughtful, the piece presents itself as an expression of relationships and human identity. It is impossible to come away from it without reflecting on the barriers, physical and mental, that can hinder real human interaction."

"An intense experience like trying to pick apart the puzzle of an overhead conversation… an exquisitely nuanced exploration of complex relationships where past traumas and resentments have put up frustrating barriers to genuine closeness."

"Deeply engaging… O’Rowe’s thought-provoking script deals in a theatrical and dramatic simplicity that serves as a counterpoint to its textual complexity… will linger long in the memory."

"A cryptic work about memory and connection… an intricate puzzle of a play, The Approach holds your attention like a transfixing riddle, rationing out clues and folding in on itself artfully."