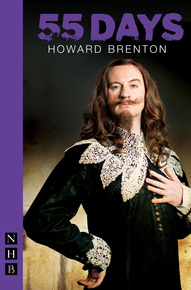 A gripping historical drama that dramatises a crucial moment of English history.

A gripping historical drama that dramatises a crucial moment of English history.
December 1648. The Army has occupied London. Parliament votes not to put the imprisoned king on trial, so the Army moves against Westminster in the first and only military coup in English history. What follows over the next fifty-five days, as Cromwell seeks to compromise with a king who will do no such thing, is nothing less than the forging of a new nation, an entirely new world.
Howard Brenton’s play depicts the dangerous and dramatic days when, in a country exhausted by Civil War, a few great men attempt to think the unthinkable: to create a country without a king.
55 Days was first performed at Hampstead Theatre, London, in October 2012, in a production directed by Howard Davies.
Howard Brenton on the historical context to 55 Days...read blog post from Nick Hern Books
REVIEWS:

"[A] confident and idea-packed piece... It could have been a dour history lesson. Instead it engages with the present, raising some pungent questions about the kind of democracy we have in Britain today."

"The beauty of Brenton's play is that, as with so many of Brecht's, there is a conflict between theory and action... the real pleasure lies in seeing a pivotal moment in English history presented with such fervent dramatic power."