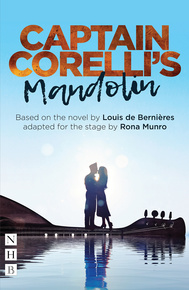 Kefalonia, 1941. Captain Corelli, an enigmatic young Italian officer, is posted to the idyllic Greek island as part of the Axis occupying forces.


Kefalonia, 1941. Captain Corelli, an enigmatic young Italian officer, is posted to the idyllic Greek island as part of the Axis occupying forces. Shunned by the locals at first, he proves to be civilised, humorous -- and a consummate musician.

The captain is soon thrown together with De Iannis's strong-willed and beautiful daughter, Pelagia, who discovers all of the complexities of love, and how it can blossom in the most unexpected and profound way.

"A vivid and tumbling dramatic presence... real riches and depths are to be found, as it highlights the coarsening and toughening effects of life in wartime, balanced against an emotive love story."

"A magical, moving immersion in Louis de Bernières' exquisite story that so many of us know and love."

"Manages to both stay faithful to the original and inject it with freshness... much of the emotional drama comes from spectacle, song, movement and music and while this means that the weighty, winding narrative of the book is simplified, it feels more streamlined."

"A fleet, muscular retelling. Liable to bring a lump to the throat."