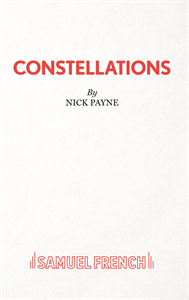 Nick Payne's Constellations is a play about free will and friendship; it's about quantum multiverse theory, love and honey.