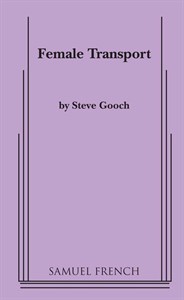 This stark, hard hitting drama is an account of the political education of six women convicted of petty crimes in 19th century London and sentenced to be transported to a life of hard labor in Britain's overseas penal colony (present day Australia).

During the six month voyage they are kept in a cramped cell below deck where they learn certain truths about society. Foremost among these is they have been condemned due to the bias of a male dominated class system, represented in the play by the crew of the prison street. Their consciousness raising is powerfully and sympathetically portrayed; at the end of their journey they have grown into a unified bunch of hardened fighters.
REVIEWS:

Premiere Production: Female Transport was fiven its premiere at the Half Moon Theatre, London, on 15 November 1973.