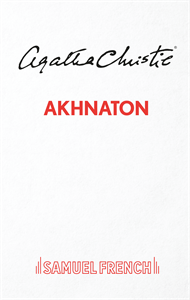 
An enlightened Pharaoh falls foul of his conservative court when he attempts to unite the polytheist Egyptians under one god -- a course of actions that forces factions of both the army and priesthood to turn against him. Undeterred, Akhnaton's vision of a kingdom where people dwell in peace, truth, love and beauty will ultimately destroy him and all those he holds dear.

Regarded as one of her most extraordinary plays, this epic historical drama is unlike anything you have read of Christie's before.
REVIEWS:

"Most impressive of all, her 1937 play Akhnaton, set in Ancient Egypt, shows a profound understanding of the mores and character of an enlightened Pharaoh who fell foul of his conservative court. One of Christie's most profound and daring works."

"Akhnaton is no didactic tract, but a drama of ruthless logic and theatrical power, its characters sharply delineated, its arguments humanized and convincingly set forth."

"Agatha's most beautiful and profound play; brilliant in its delineation of character, tense with drama...the characters are submitted to exceptionally penetrating analytical treatment, because they are not merely subservient to the denouement of a murder plot, but each one is a prime agent in the development of a real historical drama."