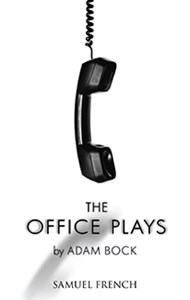 A collection of two full-length plays: The Receptionist and Thugs.

"Bock's intense initial focus on the routine goes to the heart of The Receptionist's pointed, painfully timely allegory...elliptical, provocative play..."

"Bock starts you off laughing, but leaves you with a chill..."

"...a delightfully paranoid little nightmare that is both more chillingly realistic and pointedly absurd than anything John Grisham ever dreamed up..."