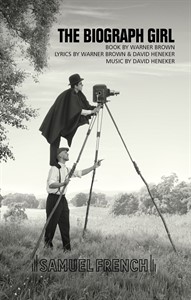 
Set in the early 20th century when silent film was sill a new form of media, Dorothy and Lillian Gish follow their family friend, the newly dubbed Mary Pickford, to New York City to become actresses in moving pictures. They are introduced to D.W. Griffith and he casts Lillian in his film The Birth of a Nation.

The movie's lack of success forced D.W. to vow to make an even bigger movie, while Lillian struggles with maintaining the image that the audiences have attributed to her. When Intolerance is also a commercial flop, D.W. urges Lillian to take an offer from another studio so that she can earn a living wage. Soon after the industry makes a huge shift with the introduction of sound in pictures, forcing every film industry to assess their place in the business.

This British salute to Hollywood's glorious era of silent pictures is ideal for stock and community theatres.
REVIEWS:

"This delightfully unassuming show contains the same naive charm as those early flocks... [it's a] minor miracle."

Premiere Production: The Biograph Girl premiered at the Gardner Centre Theatre at the University of Sussex in October of 1980, under the direction of Victor Spinetti.