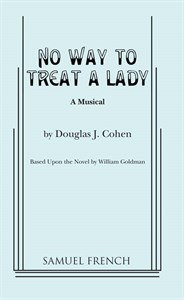 No Way to Treat a Lady

"TERRIFIC! HILARIOUS! DYNAMIC! An unabashedly histrionic romp with plenty of laughs, a fair share of romance and a welcome abundance of drollery."


This theatrically charged musical comedy thriller about a publicity crazed actor turned killer and the endearing detective who pursues him is based on the best selling novel that became a renowned movie. It is a devilish blend of humor, romance and murder with four meaty roles, two requiring great versatility: the killer adopts a myriad of disguises including a tango instructor, French waiter, female barfly and priest while one actress plays the detective's mother, the killer's mother and three of his victims.

"Terrific! Hilarious! Dynamic! An unabashedly histrionic romp with plenty of laughs, a fair share of romance and a welcome abundance of drollery."

"The best news about this 1987 Off-Broadway vehicle, which incorporates an oddball premise for musical into a surprisingly conventional framework, was the arrival of a major musical-theatre tunesmith. Cohen's delightful songs (love ballads, soft-shoe ditties, jazz, and more), boasting smart lyrics and lilting melodies, display a hand adept at revealing character nuances and advancing the story. Four triple-threat performers maximize the pleasures here...fresh and vibrant offering is a splendid way to treat an audience."

CRITIC'S PICK! "5 out of 5 stars! A divinely fresh entertainment."

"A fine way to treat a musical! A real winner."

"A fine and dandy way to treat an audience... It should be on Broadway."

No Way to Treat a Lady premiered off-Broadway in a sold-out, extended run at the Hudson Guild Theatre in 1987 directed by Ton Award winner Jack Hofsiss and starring Stephen Bogardus, Liz Callaway, Peter Slutsker and June Gable.
It received an off-Broadway revival in 1996-97 at the York Theatre Company by Scott Schwartz and starring Adam Grupper, Paul Schoeffler, Alex Korey, and Marguerite MacIntyre. It was nominated for two Outer Critics Circle Awards (Best Revival and Best Featured Actress) as well as a Drama Desk Award.