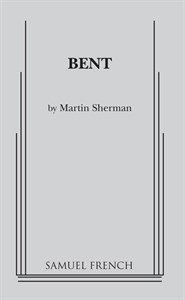 In 1934 Berline on the eve of the Nazi incursion, Max, a grifter and his lover Rudy are recovering from a night of debauchery with a SA trooper. Two soldiers burst into the apartment and slit their guest's throat, beginning a nightmare odyssey through Nazi Germany.

Ranked lower on the human scale then Jews, the mean as avowed homosexuals, flee. Desperate and on the run, Max asks his own "discreetly" homosexual Uncle Freddie for help as the older man offers little more than suggestions on how to live, as he does, practicing homosexuality on the side. Attempting their escape, Rudy is beaten to death as Horst, another homosexual prisoner, warns Max to deny his lover. Taken to a death camp at Dachau, Max and Horst branded with the "pink triangle," hope to survive with each other for comfort and courage but it is not to be.

Richard Gere created the role of Max on Broadway.
REVIEWS:

Bent was first presented at the Royal Court Theatre in London, England, on May 3, 1979. It was directed by Robert Chetwyn. The play subsequently transferred to London's West End at the Criterion Theatre on July 4, 1979.
The play premiered on Broadway at the New Apollo Theatre in New York City on December 2, 1979. It was directed by Robert Allan Ackerman.