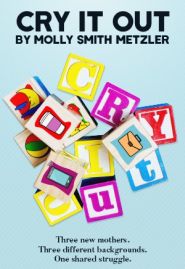 A comedy with dark edges, Cry it Out takes an honest look at the absurdities of being home with a baby, the power of female friendship, the dilemma of going back to work, and the effect class has on parenthood in America.


Four months ago, Jessie was a corporate lawyer with a glamorous Manhattan life. Today, she is in dirty yoga pants, covered in breast milk, trying to comfort a screaming newborn.

Isolated in a sleepy Long Island suburb while her commuter husband works long hours, Jessie is desperate to talk to anyone besides Food Network. So when she spies a fellow new mom and neighbor, Lina, at the local Stop & Shop, she vaults over the cantaloupe to introduce herself. Happy to have found each other, the two moms agree to meet for coffee during naptime in the sweet spot behind their adjoining yards where both their baby monitors get reception, and a fast friendship is born. Jessie and Lina may be from vastly different financial backgrounds -- Jessie is Ivy-educated and of the manor born; Lina has a night-school nursing degree and terrible credit -- but they have one huge thing in common: they've been cracked open by the love they feel for their newborns.

One coffee quickly becomes a daily coffee, as Jessie and Lina laugh through the highs and lows of motherhood. But their intimacy is punctured when a stranger who lives in the mansion up on the cliff appears in the yard, asking if they would include his wife, a new mom who is having "a hard time," in their coffee klatch. Reluctantly, the duo tries to become a trio, but with very mixed -- and surprising -- results. After all, this is a town where the haves and the have-nots live in very close company; up on the cliff is Sands Point, one of the most expensive Great Gatsby-esque neighborhoods in the whole country. How could that woman possibly be having a "hard time"?

A comedy with dark edges, Cry it Out takes an honest look at the absurdities of being home with a baby, the power of female friendship, the dilemma of going back to work, and the effect class has on parenthood in America.
REVIEWS:

"A funny story that weaves together very different but highly meaningful stories from three new mothers."

"While the voices provide different colors, they harmonize well on subjects... including the American economy and women's choices across the country."

"A deeply felt topical drama that takes audiences on an emotional roller-coaster ride that whipsaws through laughs, poignant tears and moments of monumental rage."

"In the course of discussing parenthood, postpartum depression, and gender roles, the play offers some extraordinary insights that will send you out of the theater with much to ponder."

"Tender, revealing and incisive... Cry it Out is consistently masterful in creating characters who feel real."

"This comedy with dark edges takes an honest look at the absurdities of being home with a baby, the dilemma of returning to work, and how class impacts parenthood and friendship."