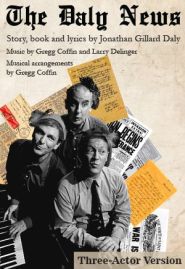 The Daly News is a musical memoir about love and distance between fathers and sons.


The Daly News is a musical memoir about love and distance between fathers and sons. The source material is Martin J. Daly's World War II-era newsletter The Daly News, written from 1943 to 1946 and distributed to Martin's children, who were scattered all over the globe in the service of their country.

The story of the play derives from letters from the home front, as well as missives from the boys overseas. Throughout the play, a contemporary character, Martin's grandson, Jon, relates personal remembrances of his own relationship with his father, Bob, Martin's oldest son. Martin's dogged determination to hold his family together during wartime, while at the same time widening the emotional distance from his sons, provides the tension in this warm, gentle play. Jon's own relationship with his father mirrors Martin's relationships with his sons, and provides the link that transports this story into the current time.