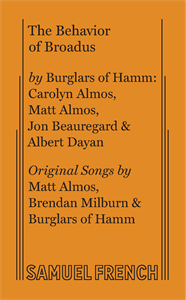 Behavior of Broadus, The

The Behavior of Broadus puts the origins of our pop culture consumerist society under a satirical magnifying glass.

The Behavior of Broadus is the incredible sort-of-true story of John Broadus Watson, father of behaviorism and modern advertising. He has the power to control your brain. Indeed, we suspect he's making you read this right now.
This Mad Men-esque dark comedy puts the origins of our pop culture consumerist society under a satirical magnifying glass.
REVIEWS:

"Triumphant [...] As delightfully self-assured as it is comically self-referential, made up of equal parts whimsy, wacky, profane and profound, this cracked experiment in satirical musical development is a wickedly entertaining watershed."

"A darkly funny, oddly joyful musical [...] this piece is a transcendent breakthrough [...] This is LA's intimate theater at its complicated best. Don't miss this one."

"A delightfully twisted musical [...] The book slyly references pop culture, skewers psychological and scientific hauteur, and takes a swipe at the unending American obsession with product."

"It's a startlingly refreshing blend of the American gumption of Oklahoma! and the satire of Urinetown [...] a great escape and mandatory viewing for anyone interested in musical theater."

"The Behavior of Broadus is the most audacious, provocative, entertaining, original musical to premiere in LA since 2008's Bloody Bloody Andrew Jackson [...] Few musicals offer as much food for the mind."

Premiere Production: The Behavior of Broadus premiered in co-production between Sacred Fools and Center Theatre Group in Los Angeles, CA in September 2014 under the direction of Matt Almos and Ken Roht.