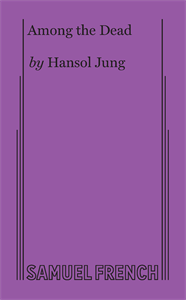 "With this outraged, deeply compassionate play, Ms. Jung is kicking, and expanding our understanding."


Ana is a Korean American who travels to Seoul in 1975 to retrieve her recently deceased father's ashes. Luke is a young American soldier fighting in the jungles of Myanmar in 1944. Number Four is the name of a Korean comfort woman camping out on a bridge in Seoul in 1950, waiting for the return of the young American soldier who fathered her daughter. Three separate time periods collide in a small hotel room in Korea, mediated by a shape-shifting Jesus who first shows up as a bellboy.

Among the Dead is a dark comedy about a family broken apart by betrayed promises, and finding each other again through SPAM, journals, and Jesus. Mostly Jesus.
REVIEWS:

CRITIC'S PICK! "With this outraged, deeply compassionate play, Ms. Jung is kicking, and expanding our understanding."

Theatre in the Now

"[Hansol Jung] is a smart writer [...] who is intuitive about structure, original in vision and powerful in her tapping into the untold story of history [...] Among the Dead is magical."

Premiere Production: Among the Dead premiered at the HERE Arts Center in a production by Ma-Yi Theater Company in New York City in November 2016 under the direction of Ralph B Pena.