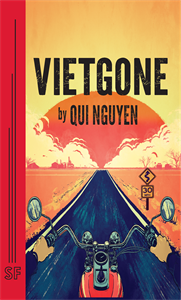 "Vietgone careens wildly, threatening whiplash to heighten our amusement. By the end, however, this riotous theatrical cartoon won me over with its simple honesty."

An all-American love story about two very new Americans. It's 1975. Saigon has fallen. He lost his wife. She lost her fiancé. But now in a new land, they just might find each other. Using his uniquely infectious style The New York Times calls "culturally savvy comedy" -- and skipping back and forth from the dramatic evacuation of Saigon to the here and now -- playwright Qui Nguyen gets up-close-and-personal to tell the story that led to the creation of... Qui Nguyen.
REVIEWS:

CRITIC'S PICK! "A raucous comedy by Qui Nguyen that strafes just about every subject it tackles and every character it presents [...] Mr. Nguyen's fresh and impish voice rarely lets up as he thumbs his nose at our expectations."

"Vietgone makes you believe that epic tales of heroism and loss exist all around us in this nation of immigrants."

CRITIC'S PICK! "Vietgone careens wildly, threatening whiplash to heighten our amusement. By the end, however, this riotous theatrical cartoon won me over with its simple honesty."

"Vietgone rides a wave of profane irreverence, sprawling storytelling,spiky humor, bald stereotypes and in the end a searing personal testament that honors the people on whose soil the war was fought [...] Nguyen understands confidently that his story possesses an intrinsic weight and he doesn't need to preach. He writes with laughter, satire, anger and profanity."

Premiere Production: Vietgone premiered at the South Coast Repertory Theatre in Csta Mesa, CA in October 2015 under the direction of May Adrales.