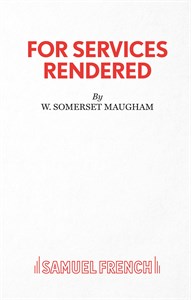 For Services Rendered sheds a harrowing light on provincial middle-class England after the First World War.


For Services Rendered sheds a harrowing light on provincial middle-class England after the First World War.

"A play with these characters, to whom we are introduced at a tennis party, as in a conventional drawing-room comedy of the period, could have been written mainly for smiles. But here the traditional plot is turned on its head. Instead of being given a lump in the throat we get a smack -- a series of smacks -- in the chops, scabrous anti-comedy on the present condition of England."

-- Anthony Curtis, from his introduction.

For Services Rendered is contained in the volume Maugham Plays: Volume Two (Vintage Classics) with Lady Frederick, Home and Beauty and The Letter.


Premiere Production: For Services Rendered was first performed at the Globe Theatre in London, in 1932.