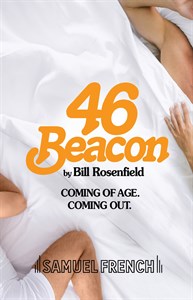 Boston, July 1970. Robert, a visiting English actor appearing in a local theatre invites Alan, a somewhat naive usher back to his hotel room after the performance. They talk. They laugh. They learn from one another and not surprisingly, they have sex. By the end of the evening they've learned more about each other and themselves than they bargained for.

46 Beacon is about two gay lives which intersect at a crossroads where one savours his differences and the other wishes only to be a part of the mainstream.


Premiere Production: 46 Beacon was first produced by Oli Sones and Ed Sinke in London's West End at the Trafalgar Studios 2 on 5th April, 2017.