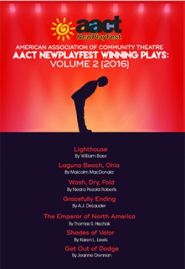 The AACT NewPlayFest was created to develop new original work and spark communication and excitement among community theatres.

The AACT NewPlayFest was created to develop new original work and spark communication and excitement among community theatres. Over a two-year period, playwrights submit their play to AACT for consideration, and winning scripts receive a world-premiere. At the end of the festival, all of the winning plays from the 2015-2016 cycle were published in this anthology.
LIGHTHOUSE   By William Baer
(Drama, 100 mins, CASTING: 3M, 3F)
Luce, a lighthouse keeper and travel writer, is surprised by a visit from Michael, a detective with whom she's been having a long correspondence. Together, they are forced to deal with her suspicions about the doctor who is treating her and her best friend for a rare form of skin cancer.
LAGUNA BEACH, OHIO   by Malcolm MacDonald
(Comedy, 100 mins, CASTING: 3M, 3F)
Dove, a middle-aged surfer/stoner, invites his teenage-era friends to his bungalow after his wife and daughter move out. The reunion ignites old passions, as they try to come to terms with with past, their present and their future.
WASH, DRY, FOLD   By Nedra Pezold Roberts
(Drama, 105 mins, CASTING: 2M, 3F)
Two sisters, Trudy and Enola, struggle to keep their run-down laundromat and take care of their Uncle Slackjaw, a Vietnam POW and wounded soul. The death of their uncle and the arrival of the mysterious Arlene provide the potential to unlock their cages of torment.
GRACEFULLY ENDING   By A.J. DeLauder
(Drama, 110 mins, CASTING: 3M, 2F)
Beth Fuller is divorced, soon to be homeless and estranged from her son, Andrew. As she tries to move in with her ailing mother, both struggle against self-interest to find love and dignity.
THE EMPEROR OF NORTH AMERICA   By Thomas S. Hischak
(Comedy, 120 mins, CASTING: 3M, 8F)
Leo, a middle-aged hack writer of rewrites and novelizations, questions his sanity when "emperor" Joshua Norton and characters from War and Peace begin to show up at his house. It seems his only alternative to insanity is to assassinate the emperor.
SHADES OF VALOR   By Karen L. Lewis
(Drama, 90 mins, CASTING: 3M, 2F)
The mothers of two Vietnam-era soldiers try to come to terms with the incident that changed their lives 10 years before, as knowledge of events they never imagined change their ideas about the nature of valor.
GET OUT OF DODGE   By Jeanne Drennan
(Drama, 90 mins, CASTING: 2M, 3F)
Molly's uncomfortable existence is threatened by the return of her fugitive father, who upsets the family relationships, leaving Molly to navigate a path to second chances.