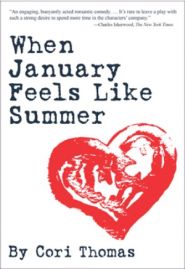 Five characters stumble towards the possibilities of being seen, being heard and being loved one unusually warm January day in Harlem.


Five characters stumble towards the possibilities of being seen, being heard and being loved one unusually warm January day in Harlem.

Devaun and Jeron are two young African-American men who are looking to earn respect in the neighborhood. Nirmala Singh and her brother, Ishan, run a small neighborhood grocery store. Nirmala's husband, Prasad, has been in a coma for three years after a robbery gone wrong. She can't being herself to pull the plug and cash in Prasad's million-dollar life insurance to find his surgery.

After Devaun is inappropriately solicited in a store by a man from the neighborhood, he and Jeron decide to take matters into their own hands and warn the neighborhood. Their door-to-door poster campaign brings them into the store and into the lives of Nirmala and Indira, as Ishan now calls herself.

Indira has recently quit her accounting job to start a dating service. Her first attempt at matchmaking is with Joe, a lonely neighborhood sanitation worker with a crush on Nirmala. Joe lives alone, eating ice-cream and afraid to hope for love after the breakup of his marriage. Nirmala, who had a loveless marriage with Prasad, is afraid to hope to ever be in love. Devaun, meanwhile, is smitten with pre-op Indira and eventually ends up on a date with her. By the end of the play, these five characters are living proof that everyone deserves love.
REVIEWS:

"An engaging, buoyantly acted romantic comedy... It's rare to leave a play with such a strong desire to spend more time in the characters' company."

"A fresh take on the traditional romantic comedy."