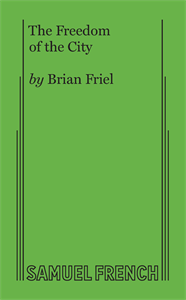 Freedom of the City, The

"Friel fleshes the awful, numbing casualty statistics and gives them breath and life."

Set in Londonderry in 1970, this gripping drama by the acclaimed author of Faith Healer and Translations, explores the ongoing Irish "troubles" that plague the country to this day.

An unauthorized Civil Rights March has been dispersed and three demonstrators, two young men and a middle-aged mother of 11, take refuge in the Town Hall. Hysterical rumor inflates the trio to 40 armed rebels and they are besieged. When they surrender they are shot.
REVIEWS:

"Friel fleshes the awful, numbing casualty statistics and gives them breath and life."

"Friel has written the best Northern Irish play since the present troubles began; it is also the least tainted by propaganda or the simplifications to which such a subject becomes prone."