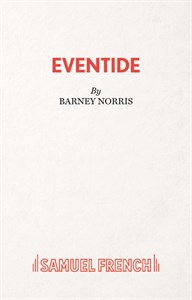 "Try and do something with your life. Be deliberate, you know?"
A love song, an elegy, a celebration: Eventide tells the story of three people whose worlds are disappearing.


John is a landlord forced to sell up; Liz is a church organist who can't get a gig; Mark takes what work he can just to pay the rent. Their tales unfold round the back of a pub hidden deep in the heart of the Hampshire countryside -- a heart that doesn't seem to be beating any more.

Eventide is the latest collaboration between playwright Barney Norris and director Alice Hamilton following the sell-out success of Visitors in 2014. Greeted as "extraordinary" (Guardian) and "heartbreaking" (New York Times), Visitors won the Critics' Circle and Off West End Most Promising Playwright Awards.
REVIEWS:

"An elegant and moving piece of writing, well crafted, subtle and layered, a play full of ache."

"Up In Arms theatre company sets out to create plays that are 'honest, human, affecting and revealing.' With Eventide, Barney Norris has fulfilled the brief."

"A play that captures all the still, sad music of humanity."

"Barney Norris is a rare and precious talent, a writer-chronicler to be cherished. Hugely recommended."

"Barney Norris strikes gold again. Like a diligent bartender, Norris has a talent for polishing the ordinary, buffing it up with a damp cloth until is shines and sings."

"Barney Norris is fast turning into the quiet voice of Britain. This intriguing play could follow Visitors onto a larger London stage and it richly deserves to do so."

"Glows with heart and humanity."

"Poignancy threaded through its every line... intricately detailed and beautiful to behold."

There Ought To Be Clowns

Premiere Production: Eventide was first presented by Up In Arms and Arcola Theatre in association with the North Wall on 25th September, 2015.