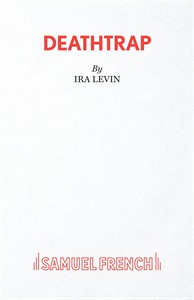 Unknown dramatist Clifford Anderson has sent his new thriller to award-winning Broadway author Sidney for comment - or has he? Without a success to his credit for some years, Sidney plots with his reluctant wife Myra about how best to plagiarize "Deathtrap" and when Clifford turns up to discuss the play with the "Master" events take a sinister turn.
REVIEWS:

"It is a classic thriller, a genre with a style, a manner and an audience of its own. If you like thrillers, do see it. I promise you that it is vintage."

"Two-thirds a thriller and one-third a devilishly clever comedy... Suspend your disbelief and be delighted. Scream a little. It's good for you."

"If you care to assassinate yourself with laughter, try Deathtrap."